“Coach Grall left behind an important legacy and memory for West Liberty University. It was a legacy of excellence and a memory of winning. We are grateful to him for his work and wish his family our condolences,” said Dr. Stephen Greiner, WLU President. The plaque ceremony was attended by many friends and alumni including Michael “Mucky”  Sworden ’73; Gay Lucci ’71; Avraham “Beinush” Melamed ’73; Michael Meyers ’74 and Thomas Bruder ’74. Meyers also was instrumental in planning the ceremony and raising money to pay for the plaque. 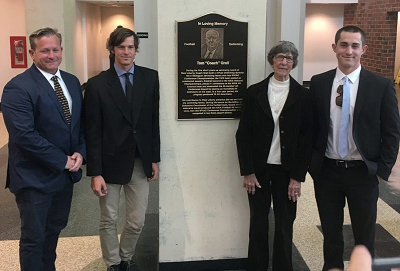 Margaret Grall is shown with her son, Thomas and grandsons.

Grall was inducted into the Hilltopper Athletics Hall of Fame in 1990 for football and swimming. During his five short years as swimming coach, Grall built a virtual swimming dynasty.

His five Hilltopper swimming teams won four West Virginia Intercollegiate Athletic Conference Championships, and his 1973 team posted an undefeated season, finished second in the NAIA National Championships, placed 11 swimmers on the NAIA All-American team and dominated the 26-member All-Conference Squad by placing an incredible 24 swimmers on the team. In a four-year period, his program produced 30 All-Americans.

During his career as a college swimming coach, he coached 42 NAIA All-Americans and six Olympians and his teams compiled a record of 140 wins against only 26 loses. On March 7,1990, he was inducted into the NAIA National Swimming Hall of Fame, and on May 11, 1990, he received a special recognition award from the International Swimming Hall of Fame in Fort Lauderdale, Fla.

But his contribution to WLU athletics did not end with accomplishments of his swimming teams. During his tenure on the hilltop campus he also served as defensive coordinator for the football team, which won two WVIAC championships and participated in two NAIA playoff games.

In addition to his stellar record as a college coach, he also served on the United States Olympic Swimming Committee for eight years, was president of the National Association of the Intercollegiate Athletics Swimming Coaches Association for two years, was a member of the coaching staff for the United States National team at the World University games in Turin, Italy, and served for four years as a member of the Board of Directors at the International Swimming Hall of Fame in Fort Lauderdale, Fla.

Grall graduated from St. Benedicts Prep, Newark, N.J. in 1952. He received his bachelor’s from Springfield College, Mass. in 1960. In 1964, he received his master’s of education from Westfield State College, Westfield, Mass. He served in the United States Navy, active duty 1955-1057 and was a survival swimming instructor, receiving an honorable discharge. He was a hall of fame coach for 24 years and a businessman for 26 years. A humble man he left behind these words:

“Few men have received more joy in a lifetime…Thank you to my wife, our children, grandchildren, son-in-law and close family friends. Thank you also to my sisters and their families. You have given so much to my life: Paddy Hamilton, Spring Lake, N.J. Mary Grace Killmer, husband John, Spring Lake, N.J. Lt. Cmdr. USN, Gene Grall, deceased; husband. The Honorable, Edward Neafsey, Avon by the Sea, N.J. Dr. Anne Reichel, husband Jack, Lincolnshire, IL. Thank you to my students, athletes, colleagues, friends and family who have blessed our lives. I have learned from all of you.”